Gregory Martens was born in 1959 in Milwaukee WI, and grew up in the rural lake town of Muskego WI. His father was a salesman and avid Fundamentalist Bible enthusiast. His mother was a factory worker, gardener, craftswoman, and country music enthusiast. During his childhood he traveled back and forth from the country to the city to visit Grandma and his older uncles and discovered the incredible early Mad Magazines. As a young teen Martens was attracted to the art section at the library and the “Northern Line” of Bosch, Brueghel, Schongauer, and especially Durer. Later, during the 1970’s counterculture Martens discovered Underground comix, Robert Crumb, Rick Griffin, Victor Moscoso, and Robert Williams. “I saw tremendous similarities among all those “Black-Line” artists and wondered if they were all somehow influenced by medieval manuscript painters in Europe.”

Gregory met Sharon, the love of his life, in college; they dropped out, got married, and raised a family of three. After many years as a salesman on the road, Martens became a cobbler in Wauwatosa WI where his whole family helped fix the shoes in their busy little shop. After ten years as a cobbler, at age 46, Martens was suddenly stricken with a very aggressive case of Bone Marrow Cancer. Many surgeries ensued, bone marrow transplants, months in the hospital, financial ruin, and great loss; but he recovered from the cancer and went into remission.

Physically unable able to fix shoes, Martens went back to finish college in the Art Department at UW-Milwaukee. The harder he worked as an artist the more he recovered. He finished his BFA and stayed on to finish grad school and received his MFA in 2012. Now he spends his time working in his studio workshop called Hip Joint Press, and teaches Printmaking at UW-Milwaukee. Gregory and Sharon have three adult children and one granddaughter, and live in Wauwatosa WI. 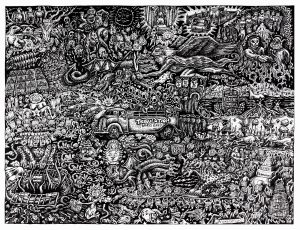 Scour the Earth and find the best images, ideas, and stories, run them through your Art Machine, then offer it all back to the world as an informative and delightful gift.

The Sketchbook of Gregory Martens. 100 page facsimile. A glimpse into the brain of a working artist. 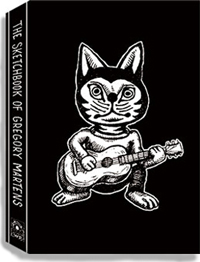 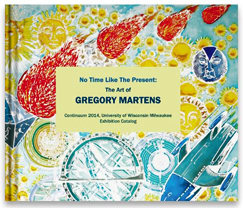